Located in the Kitashinchi area of Osaka, ""Kushikatsu Bon"", which obtained a world gourmet guide award in 2011 and achieved its strong desire to “Kushikatsu(Deep-fried skewers) beyond the world” by opening a Paris location, made its first foray into Ginza in Tokyo, Japan’s greatest peak, in July 2014. Kushikatsu Bon’s name originates from the expression “bonji tettei” (“to give it your all”), and the restaurant, which values its founding principle of “carrying normal hospitality to the extreme,” works to create an establishment which totally satisfies guests through its food, its customer service, and its atmosphere.

The head chef, Masahiro Saneshige, trained for over a decade in Japanese restaurants in Osaka and other places and polished his skills at Kushikatsu Bon in Kitashinchi. The chef learned his Kushikatsu techniques at ""A-Bon"", a restaurant in Ashiya, Hyogo where it’s quite difficult to get a reservation, and the restaurant has around 30 dishes available. He procures ingredients that are only possible for ""Kushikatsu Bon""’s Ginza location, such as tuna and seafood from the high-class sushi restaurant purveyor, Tsukiji’s Yamakou Group, as well as Yamagata’s brand-name Chateaubriand “Yukifuri Wagyu Obanazawa” beef, among other high-grade ingredients.

In addition, other popular staples include the “seafood special”—made of fish, shrimp, a paste of scallop and cheese, steamed then wrapped in perilla leaves and tofu skin—tiger prawns, foie gras and herring spawn on kelp, topped with sea urchin and caviar. The kushikatsu, made using in-season vegetables, are also integrated in a well-balanced way. The restaurant uses fine breadcrumbs in the coating and fries the Kushikatsu in a blend of lard and cottonseed oil. The Kushikatsu, which are low in sugar, lightly textured and drain off oil very well, are highly regarded for not sitting heavy in the stomach the following day. Extra Kushikatsu orders are placed often, and even female patrons have eaten around 20 sticks. As for alcoholic drinks, Kenzo Estate wine is the most popular, and Kushikatsu Bon offers a lineup of all its varieties.

Inside ""Kushikatsu Bon"", where a Japanese modern atmosphere fills the room, there are 14 seats at the U-shaped counter, totally private rooms available for four to six people, and rooms for two to three people. The restaurant can be used for a broad range of purposes, like entertaining a single guest or a group or celebrating a special occasion, and children may also come to the restaurant. We hope that you will enjoy the first-rate Kushikatsu which can only be experienced at Ginza’s Kushikatsu Bon to your heart’s content. 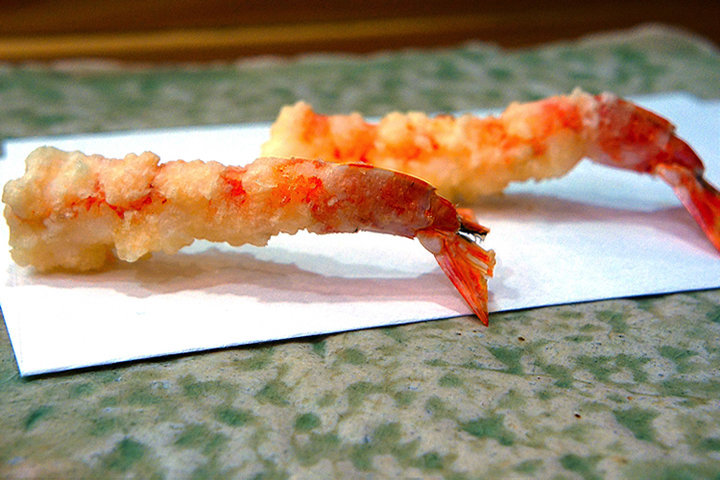